Judge Capizzi has been a strong advocate for youth throughout his career, serving as a voice for children on issues such as drug and mental health treatment, disproportionate representation of minorities, and using technology to better help children and families. He has served as a Montgomery County, Ohio, Juvenile Court Judge since 2004 and Administrative Judge since 2017. He previously served as an Acting Judge in Dayton Municipal Court, and was in private practice for 25 years. He received his J.D. from the University of Dayton and Undergraduate Degree from St. Bonaventure University. He was awarded the Distinguished Alumni Award from the University of Dayton School of Law in 2015 in recognition of his distinguished service to the community and to the law school. Judge Capizzi has overseen the growth of the Juvenile Treatment Court and the implementation of a Juvenile Mental Health Court and Family Treatment Court. He led the initiative to create multiple Evening Reporting Centers, put into practice the Juvenile Detention Alternative Initiative (JDAI), created the Pro Se Services program, and strengthened the Court’s Reclaiming Futures and Natural Helpers programs to better serve youth and their families. Judge Capizzi led the Court into the 21st century technology-wise by instituting real-time entries and the use of texting to remind families of hearing dates. In addition, he implemented the use of IBM Watson Artificial Intelligence in case management and health management issues of youth and instituted virtual hearing capabilities in all courtrooms. He serves as Past-President of the National Council of Juvenile and Family Court Judges Association (“NCJFCJ”), and on the NADCP Project Advisory Board (PAB) for the Juvenile Drug Treatment Court (JDTC) Training and Technical Assistance Project. In addition, he serves on the National Center for State Courts National Judicial Opioid Task Force and the Stewards of Change Institute National Board. Judge Capizzi co-authored: The State of Child Protection and Juvenile Justice, The State of Black Dayton: Opportunities Lost, (Jenell Walton ed., Urban League of Greater Southwestern Ohio, 2017) and  A Decade of Diversion: Ohio’s Behavioral Health Juvenile Justice Initiative, Focal Point: Youth, Young Adults & Mental Health Justice and Recovery, 2017, v.31.  In addition, he has authored articles entitled A Model for Judicial Leadership, Juvenile and Family Court Journal, which addresses judges’ roles in communities’ responses to juvenile substance abuse concerns, and What You Need to Know About Privacy, Civil Rights, and Civil Liberties Protections for Courts, Future Trends in State Courts, published by the National Center for State Courts. He is Past-Chair of the Ohio Judicial College Board of Trustees and Past-President of the Ohio Juvenile Judges Association. He was appointed by Governor DeWine in December 2019 as one of two judges statewide to serve on the Children Services Transformation Advisory Council. Judge Capizzi lectures at state, national, and international conferences focusing on judicial leadership, juvenile treatment and mental health courts, family treatment courts, substance abuse, the roles and responsibilities of guardians ad litem, juveniles’ rights in delinquency court, abuse, neglect, and dependency, racial and ethnic disparity, data and information sharing/exchange, and mental health issues. He remains enthusiastic and energetic about working to promote the welfare of children, as has been his focus throughout his legal career. Print Profile 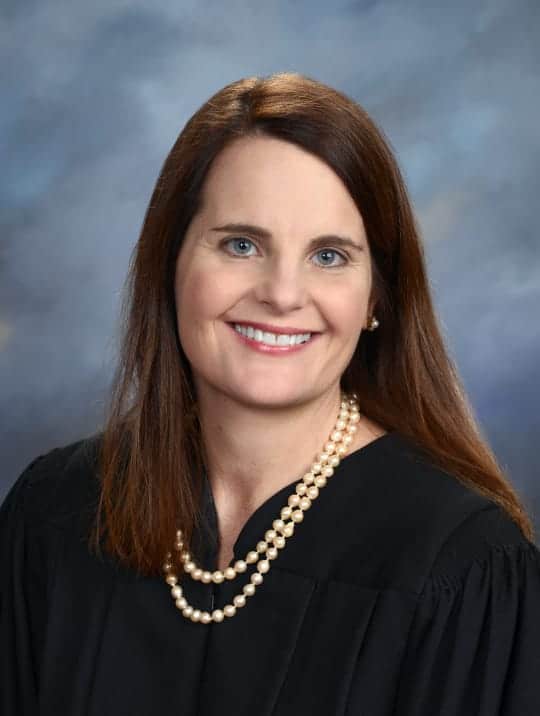 Judge Helen Wallace is the first woman elected to serve as a Montgomery County Juvenile Court Judge. Judge Wallace is committed to keeping our community safe and protecting children and families. She strongly believes all people deserve an equal and fair start in life. Prior to being elected, Judge Wallace worked as a prosecutor, defense attorney, guardian ad litem, family law and civil litigation attorney for nearly twenty (20) years. Judge Wallace earned her law degree from George Washington University Law School after obtaining a bachelor’s degree in International Affairs from the University of Cincinnati and attending Walnut Hills High School in Cincinnati, Ohio. While obtaining her education, Judge Wallace interned for the United States Department of Justice, the Ohio Attorney General’s Office, the Cincinnati Public Defender’s Office and United States Senator John Glenn’s Office. Judge Wallace is a proud mother to two teenagers and a wife to her husband of over 20 years. Research shows that chronic absence from school correlates with lower grades, dropping out of high school, and trouble with the law. Many barriers, such as lack of transportation, unstable housing, substance abuse, and mental health issues prevent children from attending school. To address these barriers and needs, Judge Wallace restructured the Court’s School Absentee dockets and founded the Court’s Education Unit. The Education Unit front-loads services to meet the needs of our children and families through a multi-disciplinary collaboration with community partners. Judge Wallace believes all people learn differently. She secured the H.E.L. P. (Helping Everyone Learn Program) grant from the Ohio Supreme Court to take a unique, innovative approach to better understand the needs of a child. The grant funds neuropsychological evaluations on youth before the Court. These evaluations give great insights on behavioral issues and overall brain development. Once issues are identified, the Court works to implement interventions to remediate and teach youth through cognitive behavior instruction and education that is tailored to their needs. Judge Wallace believes this approach will increase success in teaching children and reduce recidivism. Judge Wallace believes in using technology to improve and modernize the Courts. Judge Wallace advocated for a new Court website and text messaging capability and achieved both. Judge Wallace oversees young adults transitioning from Children Service’s custody to independence. Judge Wallace works with the State of Ohio’s Bridges Program and Children Service’s to ensure that transition plans have been executed for each young adult and that the young adult understands and knows about all the resources available to them. Judge Wallace created Book Nooks all around the courthouse to promote reading. The Book Nooks provide free books (donated by the community) to all families that enter the Court. Judge Wallace authored Diversity, Equity and Inclusion in Juvenile Court (Dayton Bar Briefs, April 2020) (please see link below). Judge Wallace is the immediate past co-Chair of the Juvenile Law section for the Dayton Bar Association (having served as Chair twice). “Dayton Bar Briefs, April 2020” Judge Wallace loves to learn and grow and strives to consistently improve herself and the Court for the public it serves. Print Profile